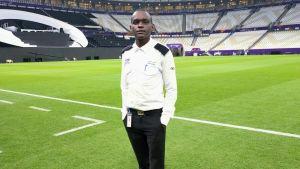 A security guard has died after a serious fall while on duty at a Qatar World Cup stadium.

The tournament organisers confirmed that John Njau Kibue, 24, died at Lusail Stadium on Saturday (10 December), the morning after the venue hosted the quarter-final clash between Argentina and Netherlands.

It was gathered that Kibue’s employer had notified the Kenyan’s sister, Ann Wanjiru, that the 24-year-old had fallen from the eighth floor of the stadium.

Wanjiru then told CNN: “We don’t have the money to get justice for him, but we want to know what happened.”

CNN also reported that it had obtained a medical document, which declared that Kibue was taken to the Intensive Care Unit at Hamad General Hospital in Doha. The document read that Kibue had suffered a “severe head injury, facial fractures and pelvic fractures”.

In a statement, the organizers of the World Cup – the Supreme Committee for Delivery and Legacy – announced Kibue’s death.