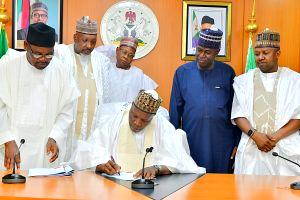 The initial budget proposal of One Hundred and Seventy Three billion Six hundred and Ninety Seven million Two hundred and forty two thousand (173, 697, 242, 000,00) had an increase of over two billion naira.

Speaking shortly after signing the budget at the Council Chamber of the Government House, Governor Inuwa Yahaya attributed the expeditious passage of the law to harmonious relationship between the Executive and the Legislature in the state.

The Governor noted that this development bbsignals a new dawn that will guide and direct government operations in 2023 fiscal year.

He described the 2023 budget as a collaborative approach…