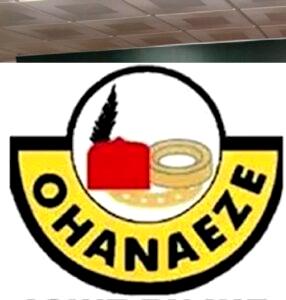 The apex Igbo socio-cultural organization, the Ohanaeze Ndigbo Worldwide, has dismissed as ” a lie from the pit of hell”, a media publication that ” over 100 Northerners were killed in the South East last week”.

Ohanaeze in a terse press statement issued by its National Publicity Secretary, Dr Alex Ogbonnia, called for the investigation of the “alarmists”, to compel them to show proof of the wild allegation.

The apex Igbo body which said that making such bogus and untenable allegations capable of setting the country on fire should not be treated with levity, urged security agencies to arrest those behind the false allegation and publication to substantiate their claims.

The statement made available to Vanguard read:” The attention of Ohanaeze Ndigbo Worldwide has been drawn to the front page report by the Trust Newspaper of Friday, December 16, 2022 to the effect that the…