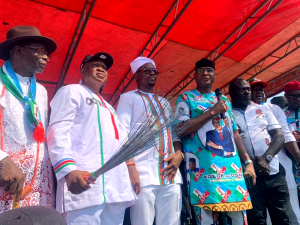 The Deputy Senate President, and Governorship candidate of the All Progressive Congress in Delta State, Senator Ovie Omo-Agege has promised to complete the Koko-Ugbenu road and Koko township sports stadium abandoned by the PDP-led Government if elected the governor.

The Delta Central Lawmaker while lamenting the absence of a tertiary institution in the Itsekiri land and a functional hospital in Warri North LG despite the fact that one of their son was the former governor of the state, promised to arrest and address the underdevelopment of the area by past and present PDP Government.