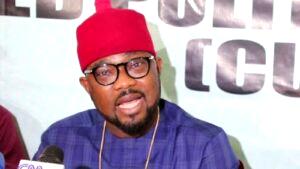 An Abuja Magistrate Court has struck out a criminal summons filed against the Spokesperson of the Coalition of United Political Parties, CUPP, Ikenga Ugochinyere by Chinasa Nwaneri, an aide to Governor Hope Uzodinma of Imo State.

The allegations contained in the summons bordered on the revelation of alleged fraud by the All Progressives Congress, APC), in the voter register in 18 States including Imo state by Ugochinyere.

Vanguard reports that Justice M. A Hassan of a High Court of the Federal Capital Territory, FCT, had suspended further proceedings on the matter pending the hearing of the application for judicial review filed by Ugochinyere.

The judge granted leave to the applicant. Justice Hassan sought certain orders by way of an order for certiorari including an order of prohibition directed against the respondents by themselves or acting jointly or through agents, prohibiting them from conducting any hearing or further proceedings…