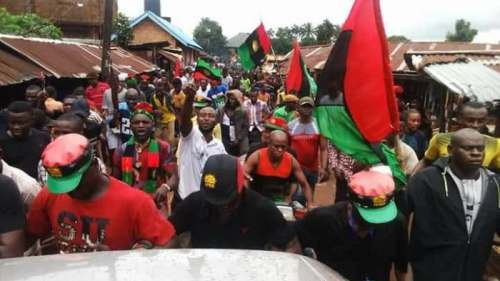 THE Indigenous People of Biafra, IPON, has warned the Miyetti Allah Vigilantes, which the leadership of Miyetti Allah claimed to have deployed across the country, to steer off Igbo land (Biafra territory), saying that they would not be tolerated.

IPOB warned that if they would “they will meet their Waterloo in the entire Biafra land”.

In a statement issued by their spokesman, Emma Powerful said: “We know their mission, contrary to the lies they are feeding the gullible public with; they are rather coming to fulfil the order by their father, Usman Dan Fodio who, in 1960, charged Muslims to deep the Quoran into the Atlantic Ocean. But we assure them that they will meet their Waterloo in the entire Biafra land.

“We want to declare in unmistakable terms, that no Miyetti Allah vigilante is needed or will be allowed to operate in any part of Biafra land. They may operate in other parts of Nigeria but not on any Biafra soil.

“IPOB is ready for them…

National Assembly gets only 1% of annual budgets — House Leader