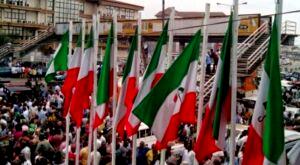 The Lagos4Lagos Movement, a splinter group within the ruling All Progressives Progress (APC) in Lagos State, has shifted its official declaration of defection to the Peoples Democratic Party (PDP) to Jan. 11, 2022.

Prince Sunday Ajayi, the group’s factional Chairman, disclosed this in an interview with the News Agency of Nigeria (NAN) on Friday in Lagos.

Ajayi told NAN that the event earlier fixed for Saturday at TBS had been postponed because of the absence of some PDP governors, who wanted to attend.

NAN recalls that the movement led by Dr Olajide Adediran, popularly known as ‘Jandor’, recently announced its defection to the main opposition party in the state and fixed Dec. 18 for official declaration and movement of its members to PDP.

“We have shifted the event to Jan 11, 2022 due to the absence of some PDP governors that want to attend,” Ajayi told NAN.

He said that the group would be received formally to the PDP on the Jan. 11 as against the…