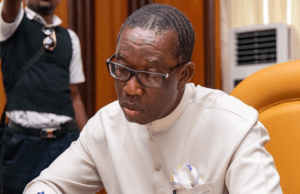 AHEAD his swearing-in for a second term in office as Governor of Delta State, May 29, the jinx breaker, Senator Ifeanyi Okowa, who Deltans overwhelmingly voted into power March 9 to complete the eight-year tenure of Delta North Senatorial district (Anioma),   according to an unwritten power sharing agreement in the state, has momentarily switched his political antenna on “silent mode.”

Though All Progressives Congress, APC, faithful in the state have queried the controversial power treaty that has seen only the ruling People’s Democratic Party, PDP, produce three consecutive governors from 1999 until date. By the arrangement, Okowa will hand over in 2023 to an Urhobo son from the Delta Central Senatorial district.

However, that is not the issue now. Silent mode is when you are quiet and not talking. Some people say it can also mean a “do…