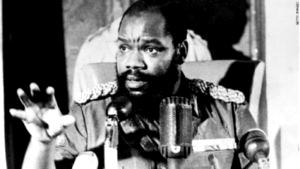 *Ex-Biafran warlord wept under my shoulder for forgiveness over role in war,he claims

*Explains how he convinced Shehu Shagari to grant Ojukwu pardon

The 83-year old claimed Ojukwu agreed to Shagari’s condition to be referred to simply as “Mr” without any military insignia,if he (Ojukwu) would be granted pardon for his role in the Nigerian Civil War.

But he said Ojukwu almost marred his chances of being accorded the amnesty when he flouted the condition few hours after by referring to himself as “General Odumegwu Ojukwu”,in an appreciation letter he wrote to him following his role in the…