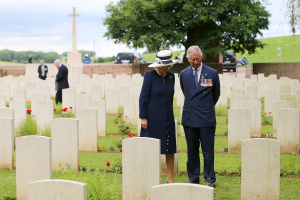 King Charles III will preside over the first Remembrance Sunday service with a two-minute silence Sunday today at 11 am, for the first time as monarch, to remember the nation’s war dead.

The monarch will lay a wreath in tribute to the United Kingdom and Commonwealth war dead, as Britain’s new Prime Minister also lauds Ukraine’s defenders.

Remembrance Sunday is marked every year in the U.K. on the closest Sunday to Armistice Day on Nov. 11 with the wearing of poppies and a national two-minute silence observed at 11 a.m.

The 73-year-old monarch had previously deputised for his mother Queen Elizabeth II, who died in September aged 96…