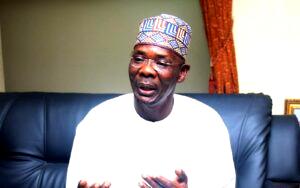 ….Even as  APC Chieftain writes off  PDP in Nasarawa

NASARAWA State Governor,  Abdullahi Sule has said that his problem is how  to develop the his state and make life meaningful for his people and not the opposition.

This is even as a chieftain of the All Progressive Congress APC has written off the main opposition Peoples Democratic Party (PDP) saying the party  is not capable of unseating the incumbent Governor, Abdullahi Sule in Nasarawa State in 2023.

Governor Sule  who spoke at the continuation of his  campaign rally  in Doma Local Government  Area to seek his reelection in 2023,  said the oppositions in the state were only trying to divert his attention and focus from the development of the state.

According to Sule, “I have refused to be distracted in my quest to make life more meaningful to the people of the state, I cannot begin to be confused with the unwholesome negative life style of the opposition who have nothing to offer”, Sule stated.