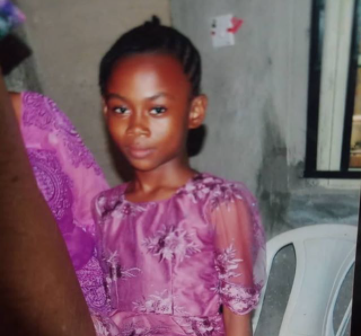 The police in Lagos state have arrested a man for allegedly raping 13-year-old girl, Favour Okechukwu, pictured above, to death in the Ejigbo area of the state on Wednesday, September 30.

According to a statement released by the spokesperson of the state police command, SP Olumuyiwa Adejobi, Favour was sent on an errand by her mother to go and buy a carton of Gala for her at Olanrewaju street, Ejigbo at about 8.30pm.

”When Favor did not return on time, a search party was raised to look for her, till when her father came back from work and himself started looking for the girl.  Later information got to them that a girl had been raped to death at No.4, Olanrewaju street Ejigbo. On getting there, the body of  Favor Okechukwu was found dead in a room that belongs to one Ajom  Brimcewil Tabi at No.4, Olanrewaju street, Ejigbo, Lagos. The body was found stark naked with blood flowing out of her private part. ” Adejobi said

The spokesperson added that the said Brimcewil…