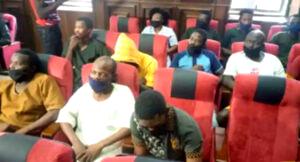 The Department of State Services, DSS, on Wednesday, told the Federal High Court in Abuja that a gang of mobile armed robbers commonly known as ‘One Chance’ operators, highjacked its case-file on the fundamental rights enforcement suit that was filed by detained associates of Yoruba nation activist, Sunday Adeyemo, popularly known as Sunday Igboho.

Consequently, the security agency, through its lawyer, Mr. I. Awo, prayed the court to adjourn further proceedings on the matter till a later date.

Awo told the court that the ‘One-Chance’ thieves snatched the case-file from his colleague who unknowingly boarded their vehicle.

He told Justice Obiora Egwuatu that aside from the case-file, other items belonging to his colleague were also stolen.

It will be recalled that though the DSS had on August 30, released eight…