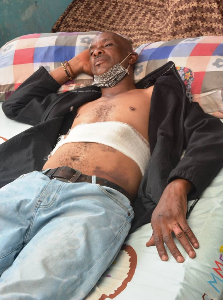 Mr Shina Edun, a victim of #EndSARS protest memorial has appealed to the Lagos State Governor, Mr Babajide Sanwo-Olu, to come to his aid, by footing his medical bills.

He made the appeal on Monday when the management team of LCC made a visit to his residence, at Ifako-Ijaiye area of the state.

Edun was stabbed on Oct. 20, during the first anniversary of #EndSARS protest that took place in 2020 by youths over police brutality.

Hee is undergoing pain as a result of the injury suffered in an attempt to protect LCC gadgets at the plaza.

On his sick bed, Edun, who struggled to utter few words, said that it was God that saved him.

Speaking with journalists at Edun’s residence, the Chief Security Officer of LCC, Mr Solomon Tolofari, appealed to the state government to support the company in taking care of the medical bills of the…