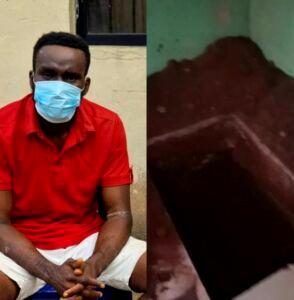 Owerri—A 38-year-old man, Francis Chukwura, has been paraded by the Imo police command for attempting to use his neighbour’s son, Henry Ekwos for ritual using a grave-size pit.

The State Police Public Relations Officer, PPRO, Micheal Abattam, disclosed this while parading the suspect at the command’s headquarters in Owerri, yesterday.

According to the Police, the suspect, Chukwura, had dug a grave size pit before he lured his victim to his room pretending he wanted the victim to assist him(Chukwura) to install a WhatsApp application.

But only for Chukwura to use a machete on the 14-year-old boy, who wriggled his way out with the machete wounds.

On how Chukwura was arrested, the police said “The unsuspecting boy innocently entered…

Electoral Act Amendment: Bill yet to be signed —  Presidency sources