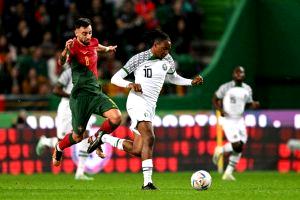 The Super Eagles of Nigeria on Thursday suffered a 4-0 defeat at the hands of World-Cup bound Portugal in an international friendly match.

Bruno would later convert from the penalty spot in the 35th minute to cap off a domineering first-half from the A-Selecao in Lisbon.

Two-quick fire goals Goancalo Ramos and Joao Mario in the 82nd and 84th minute completed the rout for Portugal over the former Africa champions who won’t be at the FIFA World Cup in Qatar.

Portugal will now shift their focus to the World Cup proper in Qatar.

They are drawn in Group H alongside South Korea, Ghana and Uruguay.

The Fernando Santos-led side open their campaign on November 24 against Ghana.