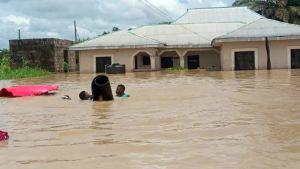 The UN Humanitarian Coordinator for Nigeria, Matthias Schmale, has announced $10.5 million dollars in new funding for the flood response in Nigeria.

Farhan Haq, Deputy Spokesperson for the Secretary-General, disclosed this at a news conference at UN headquarters in New York.

Haq said that Schmale announced the funding in a statement to support Nigeria as the country faced unprecedented flooding with more than 4.4 million people affected across the country and 2.4 million displaced.

“This new funding from the UN Central Emergency Response Fund (CERF) and the Nigeria Humanitarian Fund will provide clean water, sanitation, health care, shelter and non-food items for people in the most affected states.

“This will include people affected in the north-east of the country where people are reeling from the combined impact of floods, protracted conflict, rising hunger and a cholera outbreak,’’ he said