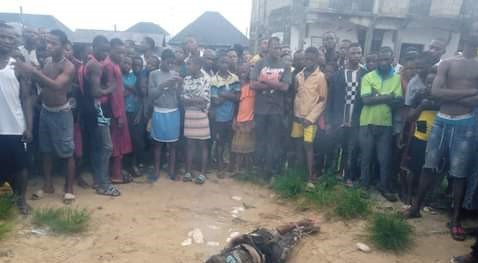 A rival cult group has set ablaze a notorious member of the Bobos cult group identified as Christopher Samuel, in Bayelsa State..

The incident which happened around 6:30am on Saturday, March 26, in the Swali area of Yenagoa, was a sequel to an early morning clash between the deceased’s group and another yet-to-be-identified group.

Though the residents and traders at the popular Swali Market initially thought that it was a robbery incident when mob accosted and set ablaze Samuel, it was later confirmed by the police that the incident was a cult clash.

It was gathered that members of the bobos cult group have been clashing with Icelanders group in several parts of Bayelsa State in a supremacy battle for territory.

Spokesman of the State Police Command, SP Asinim Butswat, who confirmed the incident in a statement, said the corpse of the burnt cultist was evacuated and deposited at the Niger Delta University Teaching Hospital, Okolobiri for autopsy.