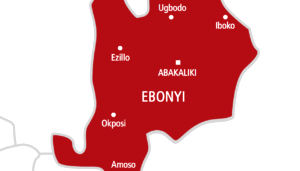 The reported incident of the killing of a middle-aged man, Chukwuemeka Issac, a week before his wedding by unknown gunmen, has triggered fear among the citizens of the State.

The victim, who was killed around his shop at Chukwu Ofoke Street, Amikeaba, Ebonyi Local Government Area of the state, has left his would-be wife devastated and confused.

Investigations revealed that the victim owns a shop at the International Market, where he sold provisions.

The incident, according to the wife-to-be, Favour Chioma, happened at about 9 pm when they had closed their shop and were about to enter their vehicle. “Some boys accosted us. They first shot into the air, then ordered Nnaemeka to lie down, shot him three times and collected my phone and left.”

The victim, who is from Obeagu Enyibichiri Alike of Ikwo Local Government Area of Ebonyi State, had planned to wed his heartthrob on Saturday, April 23, 2022, at St. Thomas Chapel, Pastoral…