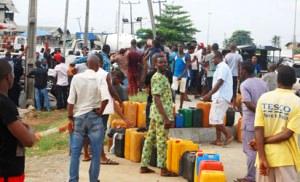 A good governance advocacy group, the Concerned Citizen Movement for a Better Nigeria, CCMBN, has suspended its planned protest against the importation of adulterated Premium Motor Spirit, otherwise known as Petrol in the country, Vanguard has learnt.

CCMBN President, Moses Ochei, and Secretary Thankgod Fubara, made this known in a joint statement on Wednesday night.

According to the organisation, the planned protest was aimed at decrying the fuel scarcity arising from the importation of the bad product.

The group, however, said that after it learnt of the efforts by the Nigerian National Petroleum Company to address the fuel deficit and end the long queue at petrol stations across the country, it decided to shelve its planned protest.

It expressed confidence in the capacity of the nation’s apex oil firm to resolve the crisis in the petroleum sector which, it said, was caused by the enemies of the country.